The Lyric’s main stage is packed. Not a seat left in the house. 352 souls sit in anticipation as we wait on the ghoulish tale first imagined in the mid-1800s and one which has stood the test of time. The subject matter says a lot about the human psyche; we simply love to be intrigued, repulsed, terrified but most importantly, entertained.

And that’s exactly what we’re given tonight. Not sure which rock I’ve been living under, but this is my first exposure to this stage and celluloid favourite. I did read the first few lines of an online synopsis before the show, but I’m happy to have left it at that. Great being a Vestal Virgin to a story set in Victorian London’s mist and a tale chock full of thrills and spills.

Director Walter Sutcliffe and set designer Darota Karolczak’s take on the gutter life of mid 19th century London is stark and in spite of the towering ceiling of the theatre 100 feet or more above the actors’ heads, through effective use of stark lighting, unhinging music and carefully choreographed action, an ever pervading claustrophobia and paranoia had me at the edge of my seat, chewing the end of my pen for most of the two hours and 20 minutes running time. 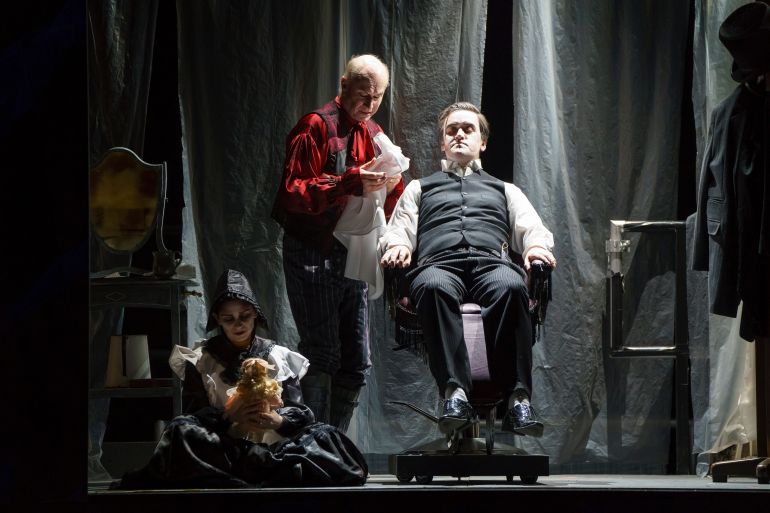 For the majority of the time the backdrop is that of a huge bloodied hand print with blood smatterings veering off in all directions. At times it’s made up of dark brown wood cladding and when the happenings need it, areas open both at stage level and then tiers above as we’re brought from Sweeney’s barbarous barber shop, to Judge Turpin’s home, the solitude of Johana’s bedroom, Mrs Lovett’s pie shop, Bedlam and street scenes.

If, like myself, you’ve never had the pleasure, the plot runs something like this: Benjamin Barker is exiled for a crime he didn’t commit by the jealous and wonderfully corrupt Judge Turpin, sent to the colonies for life he yearns for his beautiful wife Lucy and his daughter Johana. 15 years later he returns after being saved from drowning by his new companion Anthony, Barker assumes the name Sweeney Todd and plans his revenge. He lodges with Mrs Lovett, a chancer and proprietor of London’s most terrible pies. Unbeknown to Todd, his return is not as discreet or unnoticed as he would’ve wished. 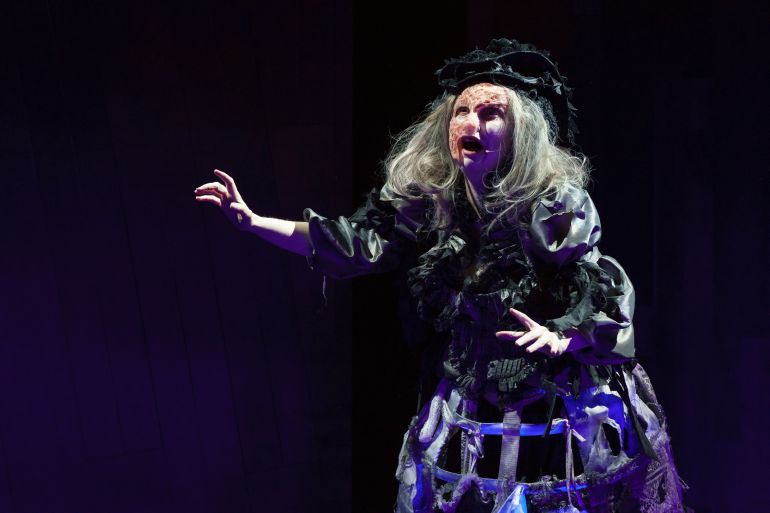 Firstly a beggar woman half recognises him through her madness and Mrs Lovett, who incidentally drops so many H’s with her Cockney tones she may as well come on doing The Lambeth Walk, is not as simple as she makes out.

And did I mention this is, of course, an opera. Northern Ireland Opera’s 11 musicians in the open pit do the original musical writer, Stephen Sondheim’s 1973 classic justice. From the opener The Ballad of Sweeney Todd, which is a recurring theme and sang throughout the piece, to mournful solos and duets, to perhaps my favourite scene of this stunning night of fine musicianship and lyrical and vocal brilliance: namely the duet of duets; in a room on the higher tier and the back of the set, Johanna and Anthony sing of their plan to flee and marry, while at the front of the stage Turpin and his henchman Beadle Bamford sing and snarl at the weaknesses of women. Truly stirring and innovative stuff. 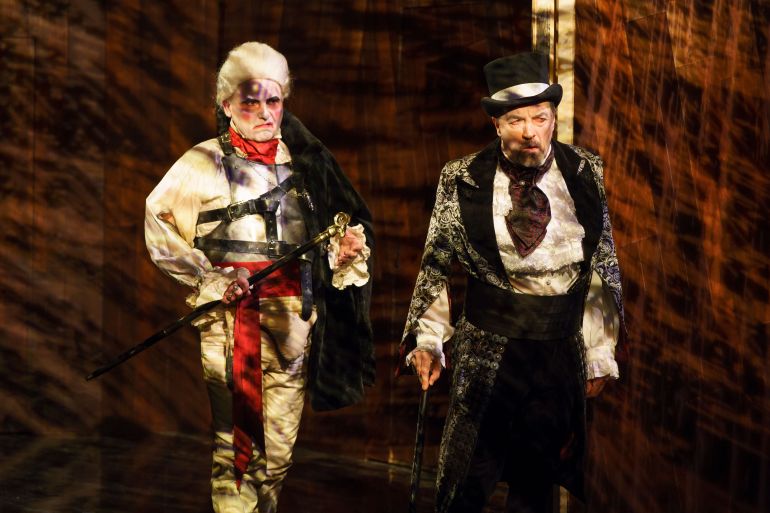 The program does not provide a running list of the songs. And as I had nothing to compare this to, I was more than thankful to bump into a Sweeney Todd aficionado during the interval. Not only could she quote line and verse from the 2007 film starring Jonny Depp, she had also seen many productions over the years, including one on the West End and stated that in her opinion, what was on offer tonight by the Northern Ireland Opera was on par, if not better, than most of the shows she’d seen elsewhere. 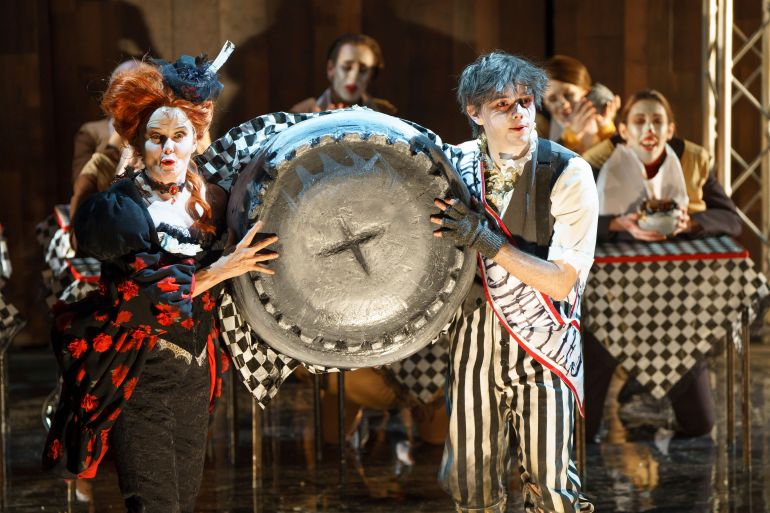 Thankfully, this is an opera for the masses. For a start it’s in English, secondly it deals with a macabre story that crosses all sexes, social standings, and theatrical knowledge; and though it does deal with what could be argued to be opera’s bread and butter, namely death, cruelty, good versus evil, revenge, more than dubious sexual advances and other morality tales, there is also room for levity. Alfonso Pirelli being a fine example. A snake-oil salesman from somewhere unnamed in the Mediterranean, our flamboyantly attired extrovert gets a laugh with almost every word he utters or overly dramatic action he makes. He also gets the infamy of being Todd’s first victim, and of being Mrs Lovett’s first creation/cremation.

Mrs Lovett is again a fount of both menace of hilarity. As the body-count rises and the coffers fill, the once poorly dressed pie-maker is now queen-like as she prances around Fleet Street the self-appointed purveyor of the pie. Her advances on Todd will raise many an eyebrow and chuckle. Todd, however, while seeing her worth has revenge and revenge alone on his mind. 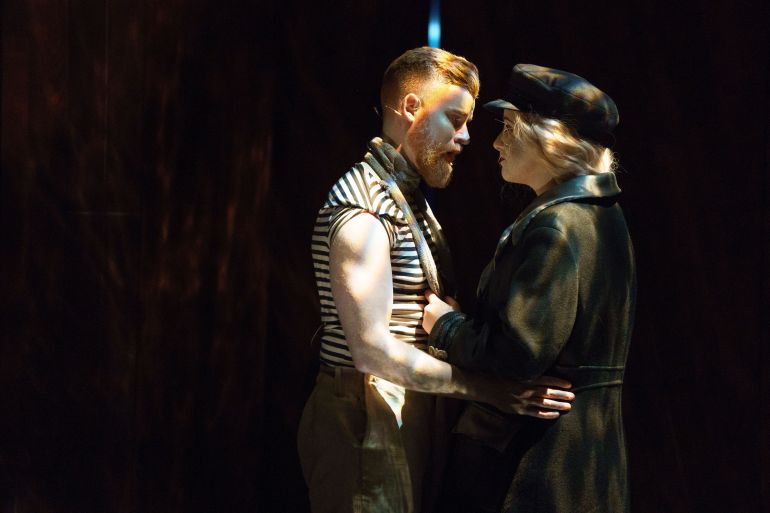 The cast and their collective CVs reads like the operatic version of the Times Rich List. Steven Page’s revels as Todd, the blurb below his picture names almost every theatre, world renowned company, opera and credential to his name, and judging by tonight’s performance, luck has little play in this succehn porterss. London born Julie Mullan was brought up down under and again has trotted the globe with work. Her Mrs Lovett is one of the many reasons tonight was such a hit. Her playful, child-like persona is hard to dislike no matter how many cadavers get put through the blender. Another from a foreign land is Richard Croxford. As Beadle Bamford, his rouge-cheeked villain is again a mixture of camp self-obsession and murderous glee. 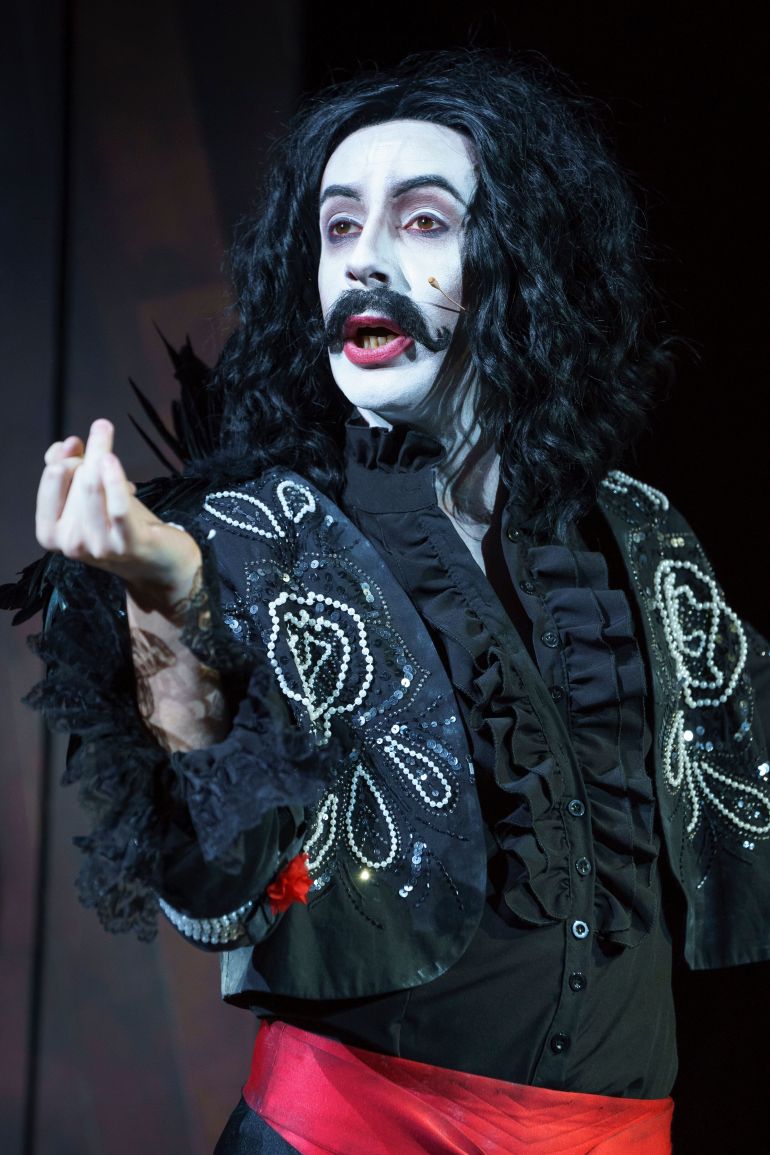 This being a Northern Ireland Opera and Lyric Theatre production, you’d expect local talent to be at the fore. And thankfully you’ll not be disappointed. Todd’s rescuer and the apple of his daughter’s eye that is Anthony Hope is played by Donegal man John Porter. His studies took him across the Irish Sea before further travels to Italy and France returns to the North to make his Lyric debut. Sweeney’s nemesis, Judge Turpin hails from Dublin and has spent most of his professional life on the Emerald Isle.
Alfonso Pirelli sounds exotic but can more often than not be found in Belfast’s Cabaret Supper Club living out his alter-ego Miss Cherry Ontop, it all makes sense back in the sanity of my flat with the program in hand. The Beggar Woman, Elaine Hearty is another Irish national with a strong CV and as well as acting directs and produces films for her company Smart Blondes.

The relative youngsters of the group are 23-year-old Jessica Hacket from County Meath. Her ashen faced Johanna is tellingly not her first outing in this role. Her soprano being integral to the duet of duets mentioned above, her voice cuts through the lower octaves of her male co-stars. Finally Tobias Ragg, Pirelli’s ill-treated slave boy turned adptive son of Lovett. A fine performance when you find out he only graduated in 2017. There are four in the ensemble, but in fear of losing your attention, I’ll say nothing more than they made the action flow and the set changes seem effortless.
14 talents, all with merits and those of you with tickets may leave the theatre with a crick in the neck.

The cast get everywhere. One moment your eyes can’t move from the action on stage, the next they’re coming down the flanks, they’re behind you and a nice touch being a somewhat unwilling audience member gets half dragged on stage to get a seat on the infamous barber chair. 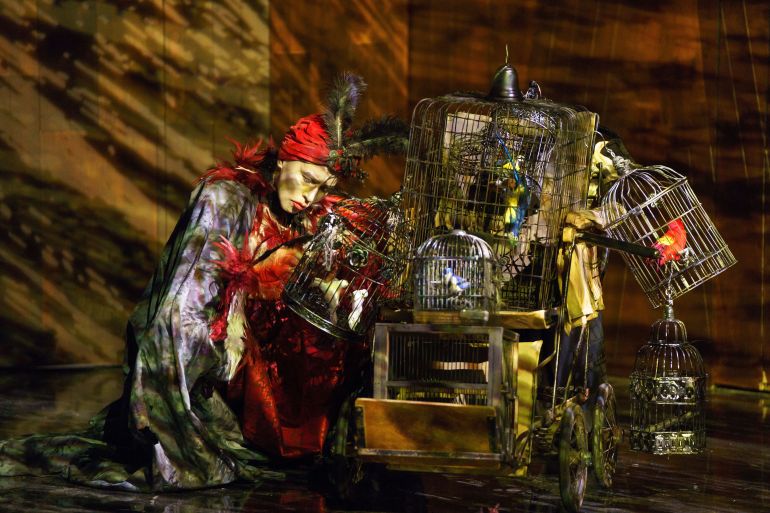 Lastly, the musicians. My heart always takes a leap at the sight of an open pit of musos and their instruments. The sight and sound of them tuning usually promises a good night ahead. You would believe it from the sheer volume nor the intricate and various nature of the music played that there’s only 12 sitting below the actors feet. Conductor Sinead Hayes studied violin at the Royal Irish Academy of Music. Again her CV is expansive. And tonight is more than testament to her talents.

A night of frights and delights with more than one twist at the end. Do not expect a Disney ‘Happily ever after’ conclusion. Tickets are selling well but there are some to be had. To get yours phone the box office on: 02890 381081 or visit http://www.lyrictheatre.co.uk