Yes, it’s another sell-out opening night at Belfast’s Grand Opera House. The audience is around a 50/50 regarding the genders and not so many are under 30. And all are here to see the play one never utters its name. Actors will refer it to The Scottish Play, many refusing to utter a line before curtain-up.

And it’s easy to see why such superstitions have arose considering the content. Murder, prophesies, double-crossings, ghostly apparitions, madness and paying the ultimate price.

This does not make for an evening of fun. Instead it tells of how, ‘Power corrupts and absolute power corrupts absolutely’. Especially when gained by murder. The plot many are aware of. If not directly then indirectly as Macbeth has entered the world of pop culture, such is its longevity and mass appeal.

But what of this outing? The National Theatre has gone for the modern, avant garde approach. Soldiers in US style army fatigues, the three witches dressed in transparent ponchos, Macbeth’s own armour now a flak-jacket. None of the characters, save maybe Duncan (Tom Mannion) would be recognisable to its original audience.

The plot is simple, Macbeth (Michael Nardone) is visited by three weird sisters, who prophesise his rise to kingship. His fellow general Banquo is told that while he will not be king himself, his offspring will. Macbeth torments over the thought of killing his king, but his ambitious, and from the start seemingly sociopathic wife, Lady Macbeth (Kirsty Besterman) insists he carries out the brutal act. Duncan’s two sons, Malcolm (Joseph Brown) and Donalbain flee to England and Ireland. Macbeth’s actions and strange behaviour, including murder after murder sets his subjects on a course of ridding the tyrant with Macduff (Ross Waiton) leading the charge.

Set designer, Rae Smith and director, Rufus Norris have gone for a less-is-more approach. And this serves the plot well. A huge staircase swings this way and that, chrome-plated palm trees see the witches and other cast members climbs and crop as the action requires. All this accompanied by snippets of just at ear level musical interludes and sound effects, courtesy of composer and musical director, Marc Tritschler.

As you would expect from The National Theatre, the performances from all of the above, plus those of the lesser characters and ensemble are unquestionable. Nardone and Waiton’s soliloquys make for powerful theatre. Also, Kirsty Besterman’s Lady Macbeth is far from what I remembered when studying it, under duress I must add, many moons ago. Her fragility is moving. 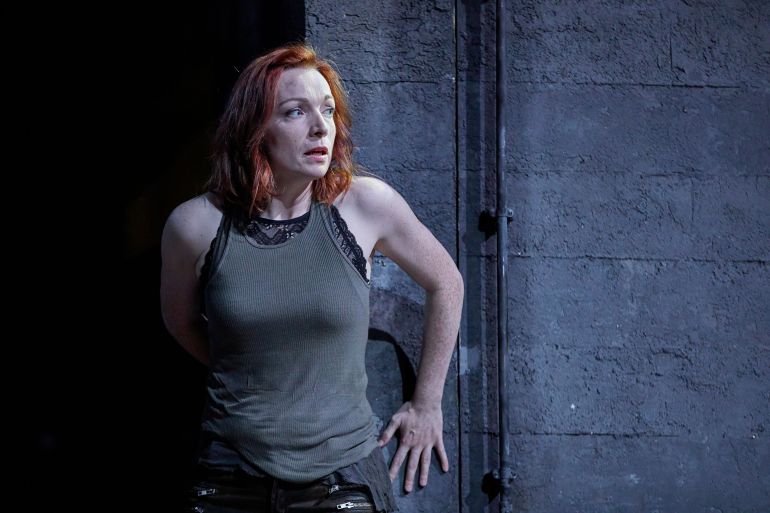 My only problem with this performance is that I feel the first half was overly long, though the second half was perfectly complete. I suppose the problem for the creative team is deciding what to cut and what to keep. All seems necessary. Though it was noticeable that two of the viewers in front of me didn’t return after the interval.

Still, and enjoyable and refreshing take on Shakespeare’s most talked about play. I would highly recommend it to those who have seen previous productions. It may, however, might not be enjoyed by the uninitiated.

Macbeth runs at the Grand opera house until and including Saturday, March 9th with matinees on the Wednesday, Thursday and Saturday.
For more information phone the box office on 02890 241919 or visit http://www.goh.co.uk