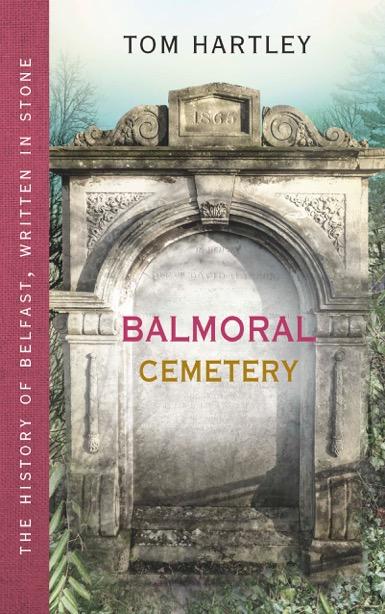 The third of Belfast historian, Tom Hartley’s, Written In Stone series, Balmoral Cemetery, tracks the history of Belfast through the lives of those buried in the little graveyard. Opposite the King’s Hall and almost hidden under the overpass, the cemetery can be viewed by bus or train travelling down the upper Lisburn Road toward the centre of Belfast. Its crooked and slanting headstones, bent trees and seemingly haphazard layout had often roused my curiosity while passing from my hometown of Lisburn to and from Belfast.

Brought up in the Catholic faith and now a nonbeliever, I was at first daunted and equally intrigued by this book. To find out its author was a former General Secretary and National Chairperson of Sinn Fein, then SF councillor, and from 2008 – 2009 was Belfast’s Lord Mayor only deepened my curiosity.

Most Catholics understand Protestantism is made up of many denominations. To read of the many varying types of Presbyterianism: Non-Subscribing, New Light, Old Light, Seceder, Covenanter, Burgher, Anti-Burgher, Reformed, Arian, Evangelical, Trinitarian and Unitarian only adds to an outsider’s intrigue and might just confuse enough to stop reading on. Keep turning the pages.

The subtitle of the book states: The History Of Belfast, Written In Stone. Hartley is underplaying his hand here. Not only is this read the history of a simple, unassuming graveyard and the lives of its Presbyterian founders, children and so on, it is also the story of their forebears who were instrumental among them who were involved in everything from the Crimean War, the Opium Wars, slavery and its abolition, the dawn of both the enlightenment, the industrial revolution, the suffragette movement, plantations, famines, cultural change and much more.

Chapter one focuses on The Malone Presbyterian Church fighting for its right for an exclusively their own graveyard. Before then, Presbyterians were allocated plots in Church of Ireland cemeteries. After the Evangelical revival of 1859 and with Presbyterianism becoming the biggest faith in Belfast 80 schools and colleges had connection with Presbyterianism. After a campaign, Reverend McKenzie, John Getty and solicitor James Torrens won their battle and 37 acres were designated for the Malone’s congregation.

In keeping with its time, few of the subject buried or connected with the ever-growing Presbyterian population of Belfast during its heyday are female, but there are some of well renown.; mostly to do with the suffrage movement, temperance movement, improvement of girls’ education and working rights.

If it’s heroes and villain you’re after, this book has both in abundance. From captains of industry, every war from The Crimean, the two opium Wars, WWII and WWII and their influence on the Presbyterian psyche. Through the close to three hundred pages we meet men of faith fleeing Scotland due to persecution, famine and to make their impact on the world.

Hartley certainly challenges the reader; not in an obtuse, all knowing way, just with his in-depth knowledge and research. When reading this book to review I was constantly writing ‘Google’ beside some words or topics. ‘Kaffir’ is one such example. The author simply indicates in brackets (now seen as a derogatory term). Quick search engine request later I found that during the Kaffir Wars, basically an uprising of the locals during the conquest of South Africa.

The book is less about a small cemetery on the edge of Belfast as a trip through time seen through those of the Presbyterian faith.

Be warned, this is not a sit down and read in two or three days kind of book, nor is it a book one can leave for a week and return to. It’s more a 20 to 30 page a night book. And one certainly worth your attention, especially if you have an interest in local and world history.
Balmoral Cemetery is published by Black Staff Press and available at: http://www.blackstaffpress.com