Some musicals rely heavily on big dance numbers, jazz hands, snazzy costumes, pyrotechnics and glitz and glamour. Tim Firth and Gary Barlow’s Calendar Girls needs none of the above distractions. And why would it? Great songs, acting, singing and a plot that brings both a crunch to the stomach through laughter and a tear to the eye anyone with a heart cannot help but love. 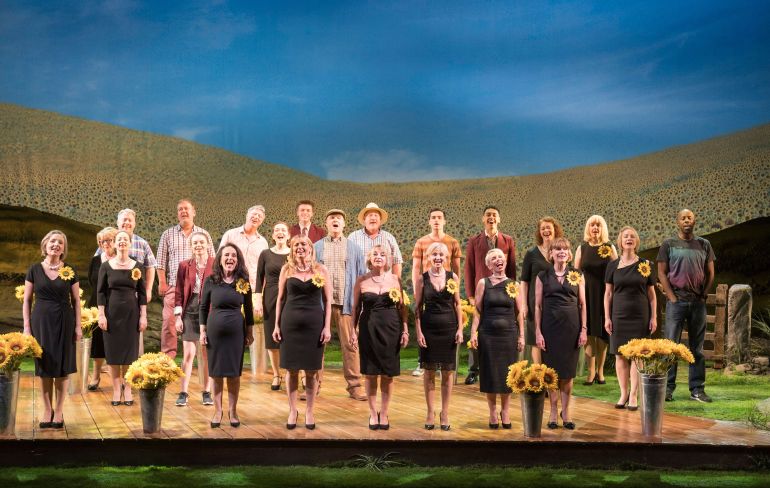 Based on the 2003 movie, the story follows the plight of Annie (Sarah Jayne Buckley) as her hubby John (Phil Corbitt) loses his fight with cancer. How to laugh at that you may ask? Well try telling that to the 1000 plus happy guests who poured out of Belfast’s Grand Opera House tonight; each and every one smiling and rejoicing.

Set in the fictional Yorkshire town of Naytley, the set backdrop is that of tumbling hills and blue skies. The only set changes being the rolling on of a piano, a branch lowered to indicate the changing seasons, a cake-stand and a few well positioned flower arrangements. When thinking of the Women’s Institute, a pursed-lipped and exacting Mary Berry comes immediately to mind. Calendar Girls will scorn all such notions from the head forever.

Opening with the oft repeated and adapted song Yorkshire, Barlow and Firth prove their musical muscle with this Elanor Rigsby reminiscent bounce of a tune. John sings acapella before the plot moves on to the hum-drum of idyllic village life. There are motions to be passed, the next 12 months to be organised, the May fete and Christmas fundraiser to be championed. All very pedestrian and typically stoic English until a seed of bad news grows and grows. 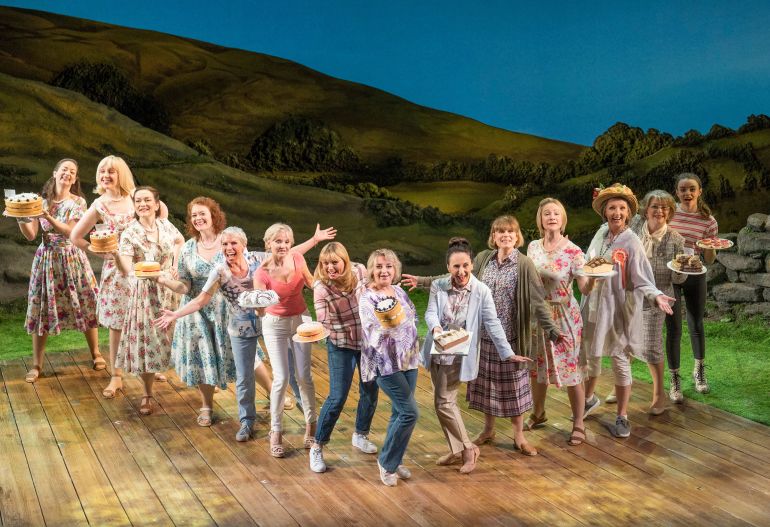 Put simply it’s the characters and their multi-faceted and equally differing backstories that make this so enjoyable and believable. Without relying on stereotypes or sad clichés, from Annie and her impulsively dizzy, best buddy, Chris, to the maudlin and prim Ruth, the surgically enhanced and long-legged Celia, rebellious vicar’s daughter Cora, self-appointed leader and sophisticated Cheshire lady that is Marie and her upstart of a daughter Jenny, all, and not forgetting the two Miss Wilsons or the dignified Lady Cravenshire bounce off each other like atoms in this quaintly English little micro-verse. Not a single one comes out at the end as they started.

Every ying needs a yang and the male characters are as equally important as the leading women. Phil Corbitt’s, John, has a fine tenor of a voice and northern grit, Derek Elroy’s Doctor/photographer, Lawrence, moves from profession to profession nonplussed and the other hubbies Rod, Colin and Denis add the backbone to what we unconsciously imagine to spirit of the North of England.

It’s not just the oldies that shine. The afore mentioned Jenny has Chris’s son Danny wrapped around her little finger. From head-boy to Sambuca-sex-starved-idiot at the flutter of an eyelash. Best mate Tommo thinks he’s being ‘groomed’ by Celia, teenage hormones on the rampage again.

Although us men were outnumbered nine to one in the audience, both genders are catered for. The songs move seamlessly from one to another. As you would expect from Barlow, piano takes centre stage. But there are six musicians in the pit and what would a northern musical be without a trumpet and trombone? Genres are crossed without the listener even realising it, and for a musical you’ll be surprised by the room given to simple, well written, spoken word.

Favourite scenes? Throw a rock in the air, you’ll hit one that is guilty. The ‘calendar shoot scene’ is the obvious forerunner. Birds Of A feather’s, Lesley Joseph’s What Age Expects, or Celia’s I’ve Had A Little Work Done, the hilarity of Ruth’s My Russian Friend And I… the songs and scenes just keep on coming and you’ll keep on laughing, when you’re not far from crying.

What really sets this piece of musical theatre apart from others is the comradery. The cast seems like a family. As with all families they’re not without their squabbles, but it’s wholesome and warming. Like Corrie, Tetley or Hovis, Calendar Girls will leave you feeling…

Calendar Girls The Musical runs until and including Saturday, May 25th. Matinees are on Wednesdays, Thursdays and Saturdays. For booking information call the box-office on 02890241919 or visit http://www.goh.co.uk