Last time I interviewed Leesa Harker back in 2016 she was promoting Maggie’s Feg Run, one of the four 50 Shades of Red, White and Blue series that made her name in Northern Ireland’s theatrical circles. Back then we focused on the usual: name, rank and number; her love of poems as a nipper; a career made up of a variety of jobs including bank manager, animal welfare officer and most startling, motor mechanic.

This time we focused on the main concern of her professional life, the new smash hit comedy, The Real Housewives of Norn Iron. And, something of interest at the end of the interview to whet the whistle and sharpen the pencils of young writers trying to break into the world of theatre

I begin with the obvious: what inspired you to write the show?

“I just came up from the title and thought it would be really funny to get all the different sorts of housewives from Northern Ireland into a play and have totally opposite characters who wouldn’t meet in real life and see how they would rub off against each-other. Then I get the characters in my head . Obviously we had a guy in it as well, the American TV producer, Terry Trousersnake {No, I’m not making names up here}.

“I also wanted to highlight reality TV. It’s so fake, these things are scripted and some people walking into these shows are unaware these shows could ruin their lives. I wanted to highlight what goes on behind the scenes. We’re all watching the arguments and terrible fights and that’s what people tune in for, the drama. But of course, there’s producer causing all that, trying to create that. I wanted to focus on that but in a comedic way”

“Well, it’s the people isn’t it? We are unique. Our wee characters are just brilliant. I also think real Northern Irish women can see through someone as sneaky as an American TV producer who tries to get them to fight. They’re not all chums to begin with, they are all different but they have to join together to get him. We Northern Irish women are a sisterhood.”

“I knew there would be four female characters. One would be a wee millie from down the road {I assume Harker meant the Donegal Road}; one would be posh, from BT9, into her fitness and health; one would be a farmer from Fermanagh and then I needed a young one, like a WAG and into her social media. They’re all completely different. Then I started working on their backstories and I wanted each to have an issue and why they wanted to be on the show. For one it was money because she’s in debt due to a gambling addiction, one was simply hoping for glamour as she’s been stuck on a farm and never even had her eyebrows done, one’s in it purely for fame and there’s one who’s bored. Her husband has retired, just lays about the house all day and has a bit of a problem in the bedroom. She simply wants out of the house and get a life, plus she’s going through the menopause.”

Do you hear tones of voice, see little colloquialisms when writing?

“I do a wee bit but it’s just a mix mash of people I know, I may not have known them long or very well. The farmer character, I had the voice of Arlene foster in my head simply because she’s from Fermanagh, you know that kind of rough and ready but also mixed with someone I’ve mixed with in the street or someone I’ve been behind the queue in Tesco. I’m just a day dreamer and a people watcher. I could sit a whole day and just watch people in a coffee shop.”

“That makes me sound conniving!” Harker says with a mixture of mirth and sincerity.

Backing away I return the laugh and add, “I didn’t mean it that way in the slightest {which was and is the truth}.

She continues: “I just write what I like and I find funny, if others do too, that’s great!”
Finally, as a writer how do you, or in fact other less well known writer approach a producer or director?

“I produce my own plays now and have done since my second one. If you’re starting off new, all I would suggest is do up a Treatment which is just one or two page of the whole story, and then maybe add a short character breakdown and send it off to every company or person you can think of. You can also look at companies that do things similar to what you’re doing. 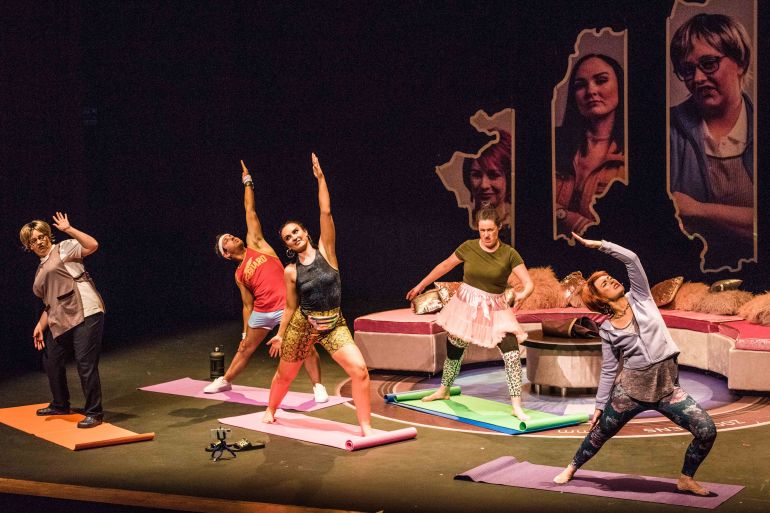 “I’m actually putting a call out this summer for scripts. If anyone has a script or a script idea in need of development with my company send it off. I would be looking for work similar to my own: comedy, nothing to heavy on The Troubles orientated and probably female based.

The Real Housewives of Norn Iron tours all over the country, with extra dates added to the Grand Opera house. For booking detail visit http://www.goh.co.uk or ring the box office on 02890 241919. For other toursdetails email leesa on