After its 2017 debut, Angela’s Ashes The Musical toured Ireland north and south winning both the public’s and the critics’ hearts. A few of the latter stated, ‘It couldn’t be done’, a ‘Hairbrained idea’ and other such nonsense before eating their pre-show words on their return from the theatre.

As someone who back then hadn’t either read Pulitzer Prize winning Frank McCourt’s memoir of growing up in consumption ridden, religion drunk, 1940s Limerick or watched the 1999 film, I walked in oblivious to such questioning. Two years and a bit have passed since its debut and I still have to both read the book and/or watch the film. ‘Philistine’ I hear you whisper. ‘Far from it’ I rebuff. As from seeing this musical adaptation I simply couldn’t have book nor film wreck the memory of the theatrical show. 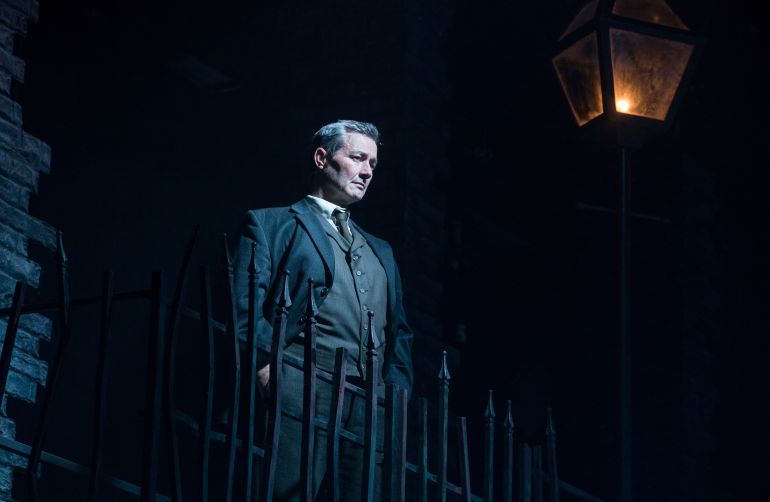 It’s true, writer, Paul Hurt, has taken some degree of poetic licence with McCourt’s initial read, but that doesn’t take away from the power of this performance. To those I’ve talked with who’ve read the original and suffered the movie, Hurt alongside lyricist and composer Adam Howell introduce levity to the tale that I’m reliably informed feels dry on the page and overly grim on celluloid.

The plot is pretty simple: a family return to Ireland after a failed attempt of living the American dream and end up living in the grimmest part of 1940s’ Limerick where the sun doesn’t shine and rain constantly falls. 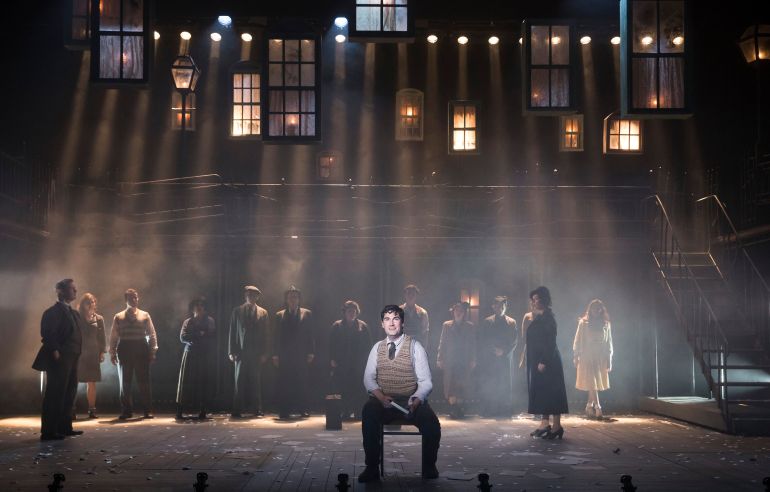 Told through the eyes of the first born, Frankie (Eoin Cannon) we learn of his father Malachy’s (Marty Maguire) fight against the English in the IRA way up North and how he swooned his mother, Angela (Jacinta Whyte) quickly married in March with Frankie born in August. Such were the ways back on the grim ole turf. ‘It was a grim old childhood, sure a happy childhood is hardly worth its while’, laments our main protagonist.

Returning from Brooklyn, America, Malachy senior carrying hiss broad Belfast accent can’t for the life of him get a job. St Vincent De Paul handouts, coal vouchers swapped for a night on the booze. ‘Go get a job in England’ insists Angela, ‘To work for the English and let them win the war?’ Malachy senior retorts. A job finally comes his way as more children are born, the job is lost and children die. In these scenes, as grim and haunting as they are, director, Thom Sutherland shows his acute attention to detail and makes the most with beautiful simplicity. Angela is holding a dead infant, cold in her arms, best friend, the upfront, chain-smoking Nora’s (Fiona Browne) demeanour changes; she takes the blanket, it falls as she holds the corners revealing nothing. The room is still, a pin if dropped could’ve been heard. Nora folds the blanket neatly and places it on a table.

Not all is doom and gloom though. Uncle Pat has always a quip on his tongue, there’s the bullying scene, ‘Frankie the Yank’ is sung. Frankie’s first Holy Communion with, ‘God’s stuck to the roof of my mouth’, two confession in as many minutes ensue. Malachy’s pride instilled in Frankie and Malachy junior (Conor Gormally) is to be his undoing. He heads to England.

The set designed by Francis O’Connor, changes multiple times; from New York’s port the upper tier withdraws as the family go home. Then it spins round as we switch from the house rented from the dreaded landlady/loanshark Mrs Francis Philomena Fionnuala Finucane, a schoolroom, the offices of the St Vincent de Paul’s run by the dastardly, far-off relative Mr Griffin, the fancy road on the hill where he earns his keep as a mail boy. 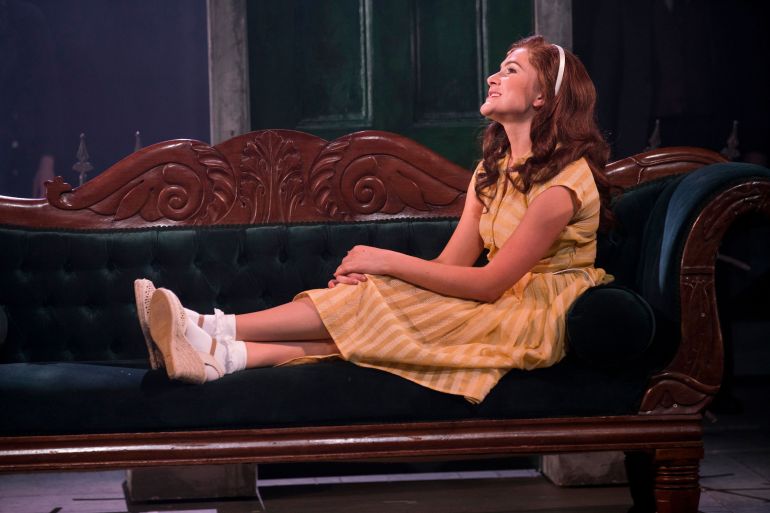 All the while, Frankie learns and saves dreaming of a new life, a big change in America. One that he hopes to share with his sweetheart Theresa Carmody (Brigid Shine). And Frankie will get there by hook or by crook. But Frankie has his father’s blood in his veins, his father’s ‘North Presbyterian curly hair’. The apple doesn’t fall too far from the tree, or does it?

A full house on its feet for five minutes.

For booking information phone the box office on 02890 241919 or visit http://www.goh.co.uk
There are a few tickets available and with matinees on Thursday and Saturday afternoons, you’ve little reason not to enjoy this fantastic musical.
Angela’s Ashes runs up to and including Saturday, September 14