There are no tricks here, no delusions of grandeur either, yet at the same time it’s not your typical musical jukebox. On Your Feet! tells the simple, against-the-odds story of Gloria and Emilio Estefan with a pacey narrative and a band that funkily blasts and then gently serenades its way through the two-hour performance. 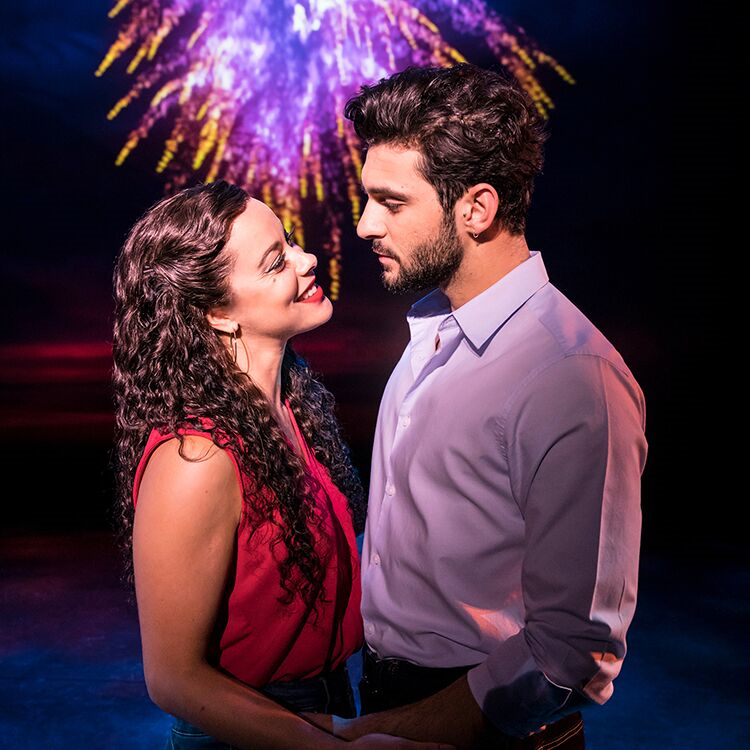 A packed Grand Opera House feels the Miami sunshine while outside winter’s first knocks are tapping at the door. The audience is a surprising mix. As the room begins to fill, the expected 40-somethings, mostly females gets salt and peppered with older couples and a few youngsters mixed in.

The tumble of a djembe can be heard from behind a veil, horns tune as the hush turns to excitement, lights out, curtain up and the show begins.

For a West End import the set is pretty minimal. There are no swinging balconies, high-wire shenanigans or Semtex pyrotechnics to startle. Director Jerry Mitchell lets the music tell the tale.

Emilio Estefan (George Ioannides) is the leader of an all-male Miami Latino band playing the periphery of the local circuit. Gloria Fajardo (Philippa Stefani) a 17-year-old psychology student caring for her long-suffering father, has a similar love of music, though has none of the former’s bravado. Emilio hears of a voice worth listening to and finds the teenager at home.

Shy and unused to performance a rehearsal/audition is arranged for the following Tuesday. Mother, also called Gloria (Madalena Alberto) is none too pleased. A tone that continues. Nan, (Karen Mann) is of a more joyful and optimistic mindset; flirting with our Latino peacock, Consuelo sends her granddaughter on with blessings and hope.
Family’ idylls and precarious nature play a massive part in this bio-musical. All will become clear when you take your seat.

The 17-year-old turns 19 and a nationwide tour calls. Gloria senior’s envy is obvious stating, ‘You’re 19 and know 19 things, I’m 48 and know 48 things. Much is made of this ongoing generational battle.

The first act is based on hustling; record stations, DJs, the clubs getting bribed and with hits like Rhythm Is Going To Get You, 1-2-3, Anything For You and Conga to name a few, playwright Alex Dinelaris could do little wrong. With a music by Estefan and The Miami Sound Machine the moments before the interval sees members of the 20 plus ensemble dragging those in the front few rows up and down the aisles to an ‘impromptu’ conga the second half takes on a more serious tone.

Bus crash. There’s less bounce but to its measure there’s more soul to the second act. Choreographer Sergio Trujillo’s reliance shows in the first half; that many feet and hands moving unison is some achievement, but the second is owned by the skills of scenic director David Rockwell, lighting by Kenneth Posner and costume designer Emilio Sosa. There are more costume and tone changes in the first twenty minutes of the second act than the whole of the first.

The music is more serene. Famous, Don’t Wanna Lose You and Coming Out Of The Dark peak and probe as the script deals with rehabilitation, stardom, self-doubt and tension between husband and wife grow. Yet they humanise the story.

As mentioned earlier, this is more than a jukebox musical with designs on selling records or regaining a fame lost or a trip down memory lane littered with nostalgia. Yes, there are some questionable moments. Both writer and director lose their way on a few occasions: the Vietnam telephone conversation in act one being a perfect example; second and third arguably the flashback scenes of young Emilio and Gloria.

But I double dare you not to leave the theatre feeling happy? The seven piece band led by musical director Danny Belton played the GOH like they were playing to 50,000.

Tickets are moving as fast as the cast’s feet during 1-2-3 and Conga. Friday and Saturday nights are sold out.

Tickets are available for Wednesday night and the two matinees Thursday and Saturday.

On Your Feet runs up to and including Saturday, November 16th