We’re just a coupla days away from Belfast’s Pavilion’s Battle Of The Bands event. The four finalists, in alphabetical order are: Bear Skin, Cu Culaan, Inflight and Vale. That’s the only piece of objective journalism you’ll read in this article.

Simply got a FB pop-up and saw Vale had a common friend and PM’d the boys, and by Christ on a short rope, lead-singer/songwriter and front man was giving me the lot down the phone a day or two after.

Let me try to describe you how they sound; bit of Morrissey, Joy Division, Ska, hammerhead-shark-metal and that dirty word Grunge all fucked into a blender, rolling boil for five minutes, quick rinse, tumble-dried; bish-bash-bosh, they’re well worth a look. I could throw another ton of superlatives, but the pressure of time won’t allow.

Here’s the interview with Luke Baxter.

So, Vale? I see you’re are from the Shankill, I assume the name came from Woodvale?

“Yes, mate, it came from the Woodvale. We started out as a three piece just practising in a kitchen in Woodvale Park so that’s how the name came about. There was just the three of us messing about, myself, Brandon on guitar and Dylan on bass.”

When did you become a five piece and start gigging?

“About the summer of 2018 we got a five piece together. We got another guitar player, Adam, and were looking for a drummer, we got Taylor, got a practice place, which is far better than a kitchen, and ended up just jamming away. I brought songs to the table and we just went from there. We were all just in the early stage of playing music and playing our instruments and picked it up from there and that’s when the band really started and brought the songs to life.”

You were runners-up in the Oh Yeah Centre’s new talents battle of the bands comp last year: happy or gutted?

“It is what it is, we were just happy to be in the top three. We’d only been going for six months at that time and so were happy enough.”

I’m sort of in a mix about your sound. From reading another interview I see the song you’d have loved to have written is Bohemian Rhapsody, yet I’ve watched gig online and you’re an interesting mix of sounds. You’re a bit Ska, then Mod and then there’s a touch of Seattle 90s heavy rock sound in there. Is that just a reflection on the lot of you as a whole?

“Yes, I myself would be into a wide range of music, Brandon and Dylan they’re into different stuff and then Taylor he’s a big metal-head”

You all look quite different. In the gig I watched online, you were wearing braces, Dylan looks like a skater, Adam is the fella with Fender Jag and the drummer looks mad. It’s refreshing not to have a band follow a certain stereotype. Is that intentional or just pure fluke?

“That’s the best thing about the band, we’re all individuals and although we are a band, we’re not going to tell each other what to wear. But if one of us was to turn up like a tramp, we’d be like, ‘What are you at?’. Everyone has their style and it does gel together nicely. A band does have to have its differences to stand out because it’s just going to be bland if we’re all the same.”

Have you looked at who you’re up against in The Pavilion’s Battle of the Bands?

“We’ve played with Inflight before, haven’t heard the other bands. Inflight are a very well put together band. They haven’t been going that long; they are musicians who are all in other bands at the minute, but they formed Inflight and they’re going well.”

So, you play guitar, piano, write the words and sing. You could’ve went down the solo route. Why not? I assume you like the band/gang mentality?

“100 per cent. I love that gang mentality and having your best mates playing behind you and supporting you. It’s a better experience, you all in that moment and the crowd as well, it’s that buzz you create together; I find that better than a solo act, there’s far more energy.”

Where are you career wise? Are you trying to get a manager or are you going to do the online thing?

“We’re trying to take advantage of the online route but we do have a person who’s trying to get us some gigs and stuff, we’re doing that ourselves at the moment and we’re trying to get more gigs and he say if things work out well he’ll work with us and give us more of a direction.”

I saw in an interview where do you want to play and your answer was ‘Wembley and Glastonbury’, you obviously don’t want to be a cult band? 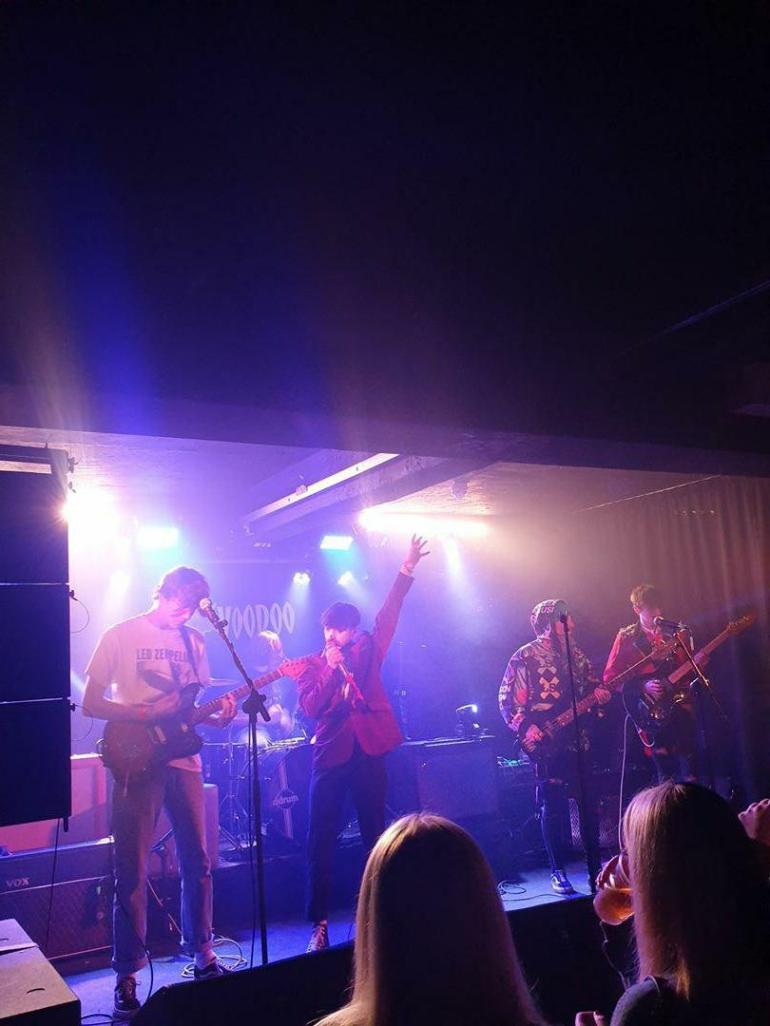 “Definitely not. I want to feel the energy of thousands and thousands of people singing my songs back to me, I don’t wanna be a no one, I want to go down in history books.”

And there it is. Subjective journalism at its finest. I know where I’ll be on Friday 13th. Only three quid in: four bands, that’s less than a quid per band.

Pavilion’s Hop House Battle of the Bands is happening on December, Friday 13th. For booking info visit http://www.pavilionbelfast.com or give them a bell on 02890 283282. Doors open at 9pm. Late bar till 1am