The Lyric Theatre’s Naughton stage is the perfect platform for such a play. The theatre holds 120, tonight there was 90, maybe a few less or more. The numbers are insignificant to the black-dressed lady in the hush and solemn of a darkened stage. 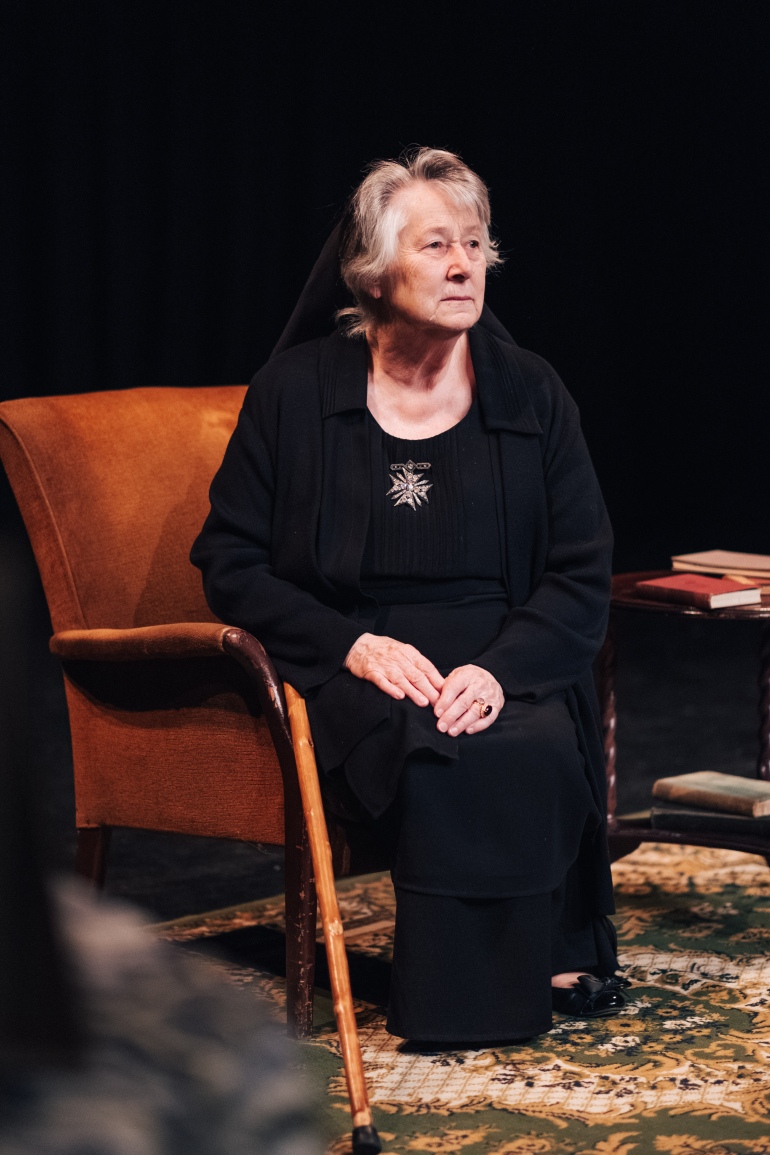 With the words of her late husband, Sam, as armour and ammunition, Joan McCready tells the story of Lady Gregory, head of Coole Park for over 30 years. “I suppose in my 79th year I should be content… I’ve had a full life, a happy life… I’ve been a poet, a playwright, a mother, a grandmother, a nationalist.” Most dangerous of all, if Lady Gregory was anything, she was a lifelong enthusiast.

To be a woman in a man’s world in the latter half of the 19th century and the early decades of the 20th cannot have been an easy life. Not one in an Ireland desperate to throw off the shackles of its English masters.

Strange to think the last Two-For-One production I saw was No Surrender with Sam McCready issuing the war cry of “Ulster is right, Ulster will fight.” In Coole Lady the positions are polar opposites. Unionism is turned to Nationalism and the cry that of “Ireland will be free, from the centre to the sea.” The fifth daughter to an evangelical Protestant mother whose eyes were firmly on her favoured four sons; her father the head of Roxborough estate in Galway. Money it seems cannot buy happiness. Not to such an enquiring mind.

The set is minimal. A cosy chair, tables either side with mementoes, letters, pictures. A subtle little Irish ballad welcomes McCready on stage. Other than that, there is no music or sound effects, changes of lighting, costume or other distractions to corrupt the lyrical writing and collected acting of the McCready duo in this ode to Ireland, W.B Yeats, the Irish Literature Movement and an unquenchable spirit.

A childhood of plucking pheasants and stolen reads of folklore, Shakespeare, the influence of Catholic farm workers and her Gaelic speaking nanny, Mary Sheridan, soon leads to a chance meeting in Cannes with Lord William Gregory. 36 years her senior, an odd couple, but the chance of self determination is too great an opportunity to pass.

Honeymooning in Italy, France, Spain, Istanbul, affirmation of revolutionary ideals confirmed in Egypt, an illicit meeting with a plagiarist English poet makes for an interesting introduction. And we haven’t even met William Butler Yeats yet.
The rousing of intellectuals with little faith in the possibility of Irish theatre, parties in London, the comings and goings in Coole Park, the questioning of her own abilities as a writer and unswerving faith in her hero Yeats.

To list the names of who Lady Gregory did not meet and influence at the birth of Irish theatre would be easier than to list those she did. Moore, O’Casey, Singh, the Fay bothers, Annie Horniman, the list goes on.

And the events she lived through: the sinking of the Lusitania, a World War, fighting the establishment every step of the way, a grandmother’s jealousy, grief and not to mention a civil war, threats of assassination rebuffed and the history of two houses.

The final few minutes are testament to both McCreadys. The ‘rivers’ soliloquy words of beauty. A charmed audience brings its hands together for minutes. A few stand in ovation.

You’d be mad to miss this performance.

Coole Lady runs until and including Sunday, February 9th. Matinees are on the Saturday and Sunday. For further information visit http://www.lyrictheatre.co.uk or call the box office on 02890 381081