The last night of the year 1930, a German railway guard checks the ticket of a struggling American novelist. Jumping from London to Paris with writer’s block and no vision of what his book will be, Berlin seems a more likely place to find his muse. 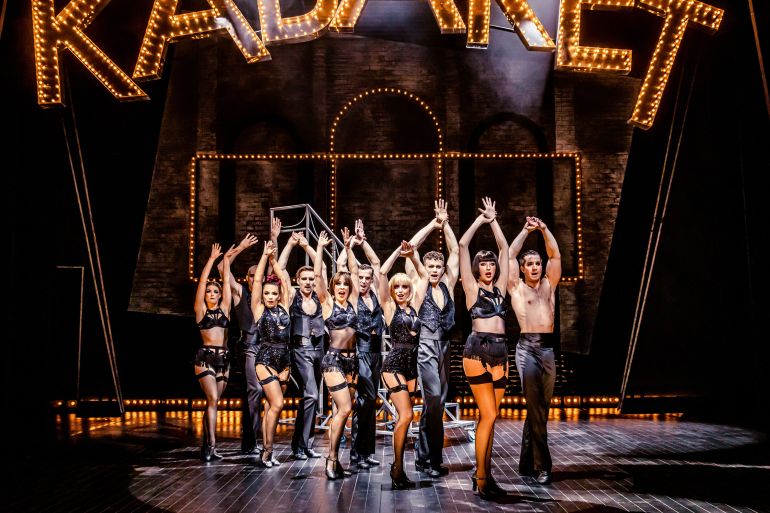 Let’s get things straight, right from the off. If ever there was a musical that knows it’s simply that, Cabaret is it. No pretence of a deeper art lies within. The show is here to reveal the human condition in all its beauty and ugliness. Full front nudity? Check. Immoral behaviour? Check. Cynicism? Check. Naivety in the face of the obvious? Check. And where would we be without possibly the most endearing and tangible trait of all mankind? Yes, hope is here too. Though at the end of the show it may be hard to find.

In these uncertain times, be they local, national or international, how bemusing, given our current political state that Cabaret washes itself onto Belfast’s shores. If ever there was a musical ever so apt and almost too close-to-the-bone to be believed, this is it. 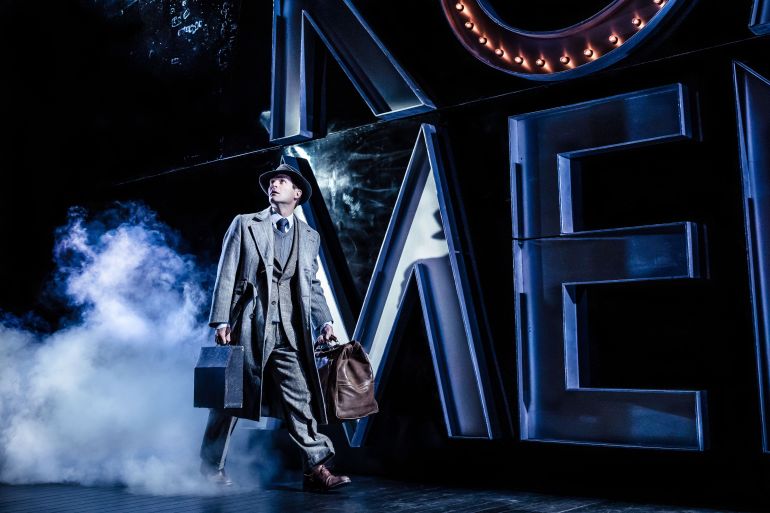 The train pulls in and our writer, Cliff Bradshaw (Charles Haggarty) stands at the platform. German, Ernst Ludwig (Nick Tizzard) befriends and sends him to a boarding house where he is sure to be welcomed. A haggle ensues, owner Fraulein Schneider (Anita Harris), once a lady of more substantial worth, drops the price of the room to 50 marks from 100.

From there to anywhere. The Kit Kat club is seedy; seedy yet inviting. Acres of flesh and fishnet its upholstery, ever vice is catered for, ‘Girls will call you, boys will call you, in the Kit Kat Club’. The master of ceremony, Emcee (John Partidge) is a shapeshifting, gender-bending magician whose moral compass quivers and darts from north, east, west and south. 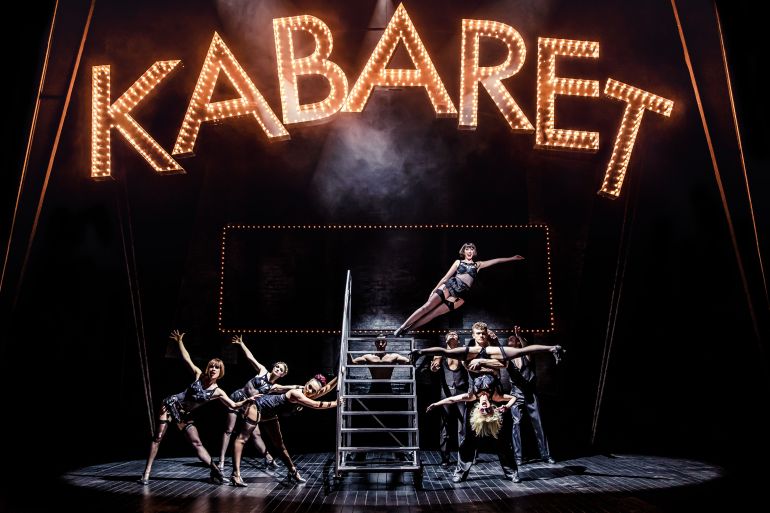 Sally (Kara Lily Hayworth), like all involved, our English girl abroad has a past to hide, a tale to tell and an extremely original hangover cure, when she has one. These characters and their lives make for much of this show’s content, but other figures complete the tale.

Herr Schultz’s (James Paterson) meekness and naivety is only matched by Frauline Kost’s (Basienka Blake) forcefulness and insatiable good will, lust or patriotism – call it what you will – for sailors, is infectious. 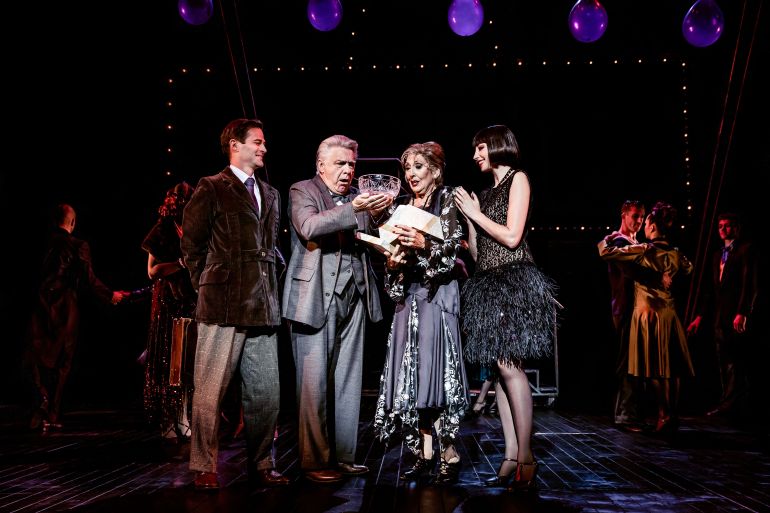 The music is pure. Through the first half it immerses every scene; rarely, if ever, is there a moment where a note is not chimed. From the songs of opener Willkommen, to So What, Perfectly Marvellous, the touching Maybe This Time, the brash Money and more; every song drives the narrative along. Between so many recognisable songs, the musicians nuance every step with an effect of some kind.

A hint is given as the interval approaches, it doesn’t last long as our Emcee and ensemble reveal where Germany is going.

All the force of the first act is to be repeated in the second but with an added element of imminent danger. Compared to the first half there’s silence to be found, dialogue without music more prevalent. Between the lives falling apart and emotions strained the tone is more subdued. If ‘subdued’ can ever be written about Cabaret? A starkness falls, the set changes as often as our Emcee’s costume and sexual orientation. The tone is melancholy yet with brevity never too far away. 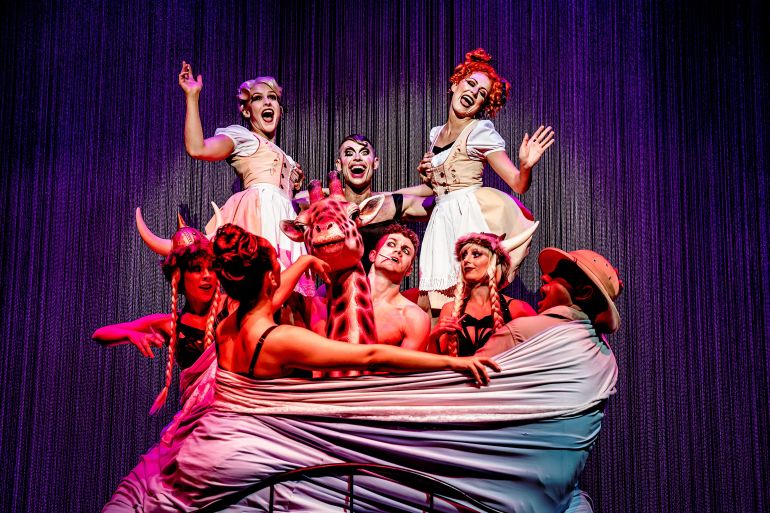 Director Rufus Norris, sound designer Dan Simson and choreographer Javier De Frutos stick tightly to Kander and Ebb’s original. And why fault them? Cabaret should be the litmus test for all musicals. If you don’t adore this, musical theatre is not for you. 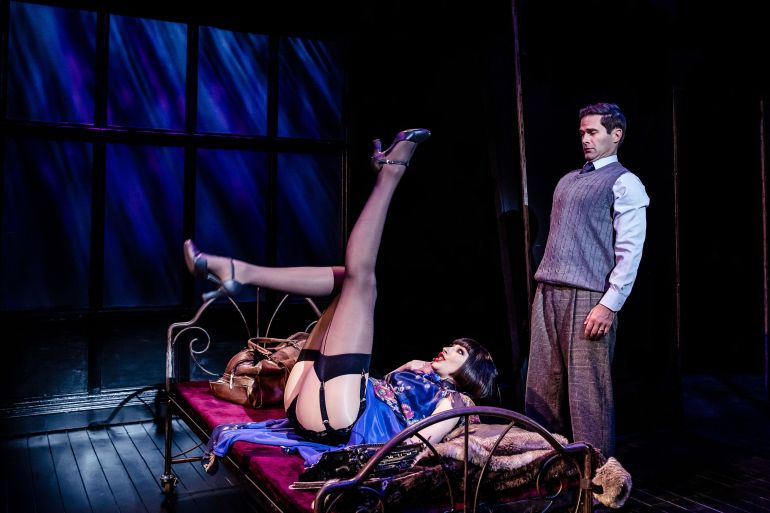 Tickets are flying. Few are left for the evening shows, some remain for Thursday’s and Saturday’s matinees. To book yours visit http://www.goh.co.uk or phone the box office on 02890 241919
ENDS