As the countdown to Dog DLA Afternoon’s Baby Grand debut gains momentum, writer Stephen G Large talks to Culture Crush NI on the play, his first foray into the world of film, other current work, Northern Ireland’s gross national product, adlib and how it can all go terribly and funnily wrong on the night.

The plot to Dog DLA Afternoon centres round Dundonald being annexed by Lisburn City Council in 2015, a rebellious crew have set themselves up as liberators, of course every army needs supplies and money to buy them. A bank needs robbing and Dave ‘The Venezuelan’ Taylor and John ‘Crazy Horse’ McCracken are the boys to do it. Pity the pair mistakenly chose a food bank. They’ve leverage though in the form of a heavily pregnant woman as a hostage, as ‘The Venezuelan’ starts to slip into a diabetic coma and with the world’s press and the PSNI at their door, hope now lies with the President of the United States… I’ve read the book and if the play is as funny as the book, the ticket will be worth every penny.

Stephen, I last interviewed you back in 2017, since then you worked constantly and your Dundonald Liberation Army Facebook page has continued to grow, you must be more than happy?

“Yes, the page has close to 40,000 followers last time I checked. To be honest with you it just doesn’t get the same level of attention it was getting a couple of years back when I had more time. It’s always been my intention to keep it going because I enjoy it. It’s nice to have an outlet to be able to say whatever you like without someone saying ‘You can’t say this, you can’t say that’. I enjoy having an that outlet for an unfiltered view of my humour.”

Dog DLA Afternoon moving from book form to the stage, how did that come about?

“I originally wrote a draft of it in 2017 and when I was shopping it around, maybe it wasn’t up to scratch. So last year, after I redrafted the second run of Three’s A Shroud, I decided to go back and look at Dog DLA Afternoon and redraft it too. I sent it to the chief executive of the Grand Opera House and said, ‘Would you read this?’, that was in August 2018. He got back me and said ‘You’re in a pile but I will get round to reading it’. He took it away with him at Christmas and then emailed saying, ‘I loved the script, I actually read it twice on my holiday, let’s get you in for a meeting in February’. 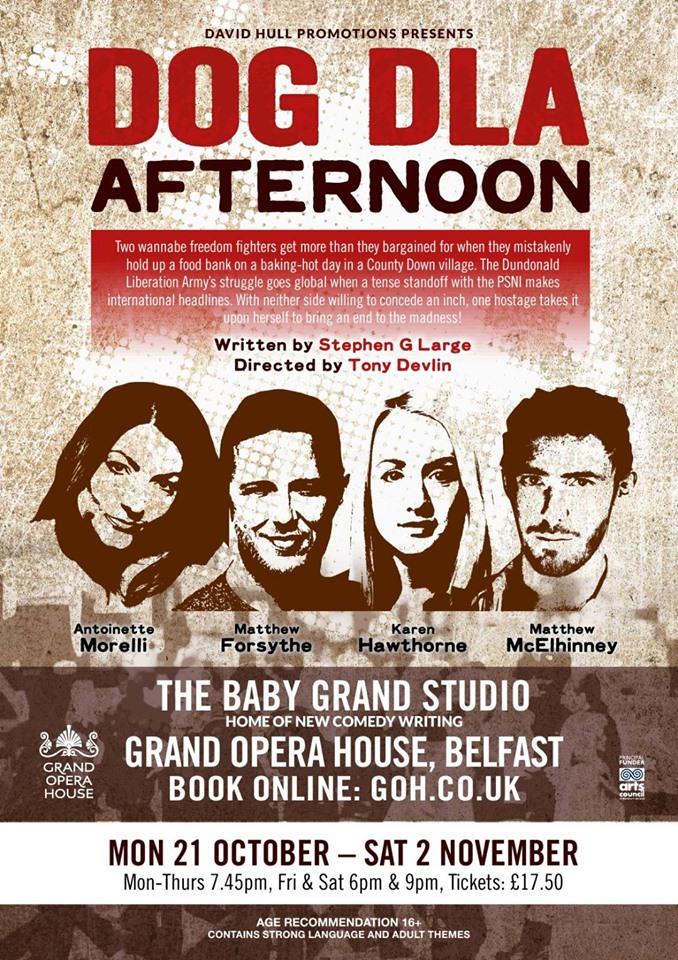 “Then I approached David Hull Productions, he had a read of it and he believed in it and the main aim is to get it on to the main stage”

Did you have much input regarding cast etc.?

“Yeah, I did. It wasn’t solely my decision by any means but I was asked for my opinion and I suggested some names. We held some auditions and I was part of that process, so it was a collective thing, there was no one person pertaining anything. Tony Devlin from Brassneck Theatre Company is directing and we all had our say. It’s a real team effort.”

What was the reaction to Three’s A Shroud like?

“As good as the reviews for Three’s A Shroud were, there were a couple of gripes from people in the undertaking community who said, ‘It wasn’t very realistic’ and was, ‘portraying undertakers in a negative light’. I was like, ‘It’s like a peeler watching Police Academy then coming out of it and saying, ‘Fuck, that really offended me, that portrayed me in a bad light’. The case was the play was highlighting the divisions here and how we come together to hate someone else.

“It wasn’t supposed to be a real life portrayal of that industry. Good old Northern Ireland, eh? No matter what you do someone will complain. Being offended is our gross national product!”

You’ve set up Bada-Bing Productions, can you tell me more about that?

“I’ve been working on a screenplay which is called Normal Lives. Around the time of Three’s A Shroud’s first run I wrote the screenplay and approached NI Screen and asked if they would be interested in investing in it and developing it? They read the script, liked it and gave some funding. It wasn’t a hell of a lot of money but it enabled me to bring on board a script editor who gave me extensive notes. Since then the script has been with Sam Neill [of Jurassic Park fame], his UK agents have the script. He’s not on board as such, but he’s read it and liked it and is basically waiting on the sideline to see how things develop with it.

“I took the script down to the Galway Film Festival this year where I had a series of meetings. That was a bit haphazard because I missed a deadline for meetings of my own and they – the Galway Film Festival – contacted me the day before and said, ‘There’s been a cancellation, would you like to fill in for nine meetings?’. It wasn’t ideal because obviously I’d nothing prepared. I was attending this other guy’s meetings that he’d picked with companies he wanted to speak to. They wouldn’t have been my choices, some of them would’ve been, the others, not really.

“So I had to fill in all the paper work, get up at 5am and drive all the way to Galway – where I didn’t have accommodation, do all the meetings, which was like a cross between Dragon’s Den and speed dating. I was in this ballroom and there was about 200 tables set out with all these production companies and distributors.

“There’s a desk and you’re sitting opposite one other person, then after the 20 minutes a buzzer goes and you go on to the next meeting. Once it was done I had to get back in the car and drive all the way back. 500-odd miles in one day.

“It was tough going, a couple of the meetings were worthwhile and a couple weren’t. The script has taken up a large portion of my life since we last spoke. From the initial idea to writing the screenplay, getting NI Screen involved and trying to get it picked up, it’s a lengthy process. A sitcoms and plays are lengthy processes but nothing compared with trying to get a film made. It can take five to 10 years.”

Normal Lives is a fairly open title, can you give more detail of what it’s based on?

“Yes. It’s set in post Good Friday Agreement Belfast. There’s this group of young friends who are out every weekend during the explosion of dance music and the ecstasy scene here. These three teens are living this hedonistic existence and then one of the teenagers’ uncle gets released from prison under the terms of the Good Friday Agreement and the uncle notices the path that his nephew is going down; it’s basically their world’s colliding. It’s not a comedy per se, Tonally, it’s along the lines of Trainspotting.”

So Bada-Bing is mainly a vehicle for the production of the film?

Large laughs, “That’s the longest answer to a question ever. Yes, I had to set up a limited company in order to submit an application to NI Screen. A limited company means if I put something on and it goes mammary glands north then I’m not putting my kids on the street over one of my ludicrous schemes.”

What else have you been up to?

“I’ve been brought on board by the Hole In The Wall Gang to write for the latest series of A Perforated Ulster. I worked on the previous series and at the end of it, I spoke with Tim McGarry and told him I really enjoyed it. Thankfully I got the call to come back and do the new series.

“I’m also writing material for the Paddy Power betting site. If you’ve seen their stuff, you’ll know it’s quite barbed. They poke fun at big football stories and it can be quite close to the knuckle but that’s right up my alley when it comes to humour. I started contributing for them a few months back.”

I read an interesting article recently on famous scenes that came about from actors adlibbing, does that happen much with the stage productions you’ve been involved with?

“Absolutely. What you’ll find is something you think works on a page for whatever reason doesn’t when it comes to rehearsals. At that point one of the cast might have a suggestion, ‘Why not try this?’. If a cast member has a suggestion that is going to improve the show, you go with it 100 per cent because everyone is working towards the same goal which is to get the best possible result. There’s no point in being precious.”

And the unforeseen must always come up during a show, does that stress you?

“We took Three’s A Shroud up to Larne and the character Spike has an Alsatian called Sasha. There never was a dog on stage but you knew when Spike was about to come on because there was a barking track. A blind woman came to the show and brought her guide dog along. Anyway, every time Spike came on stage and the barking track played, the guide dog started fucking barking back and wouldn’t shut up!

“The first play we put on in 2016, the audio fucked up and they wrestled with it for 45 minutes. The next thing someone tapped me on the shoulder and there was an older couple in the audience who’d fallen asleep. People were taking photos and sticking them up on social media. I just wanted to die on the spot.

“Then last year the chef at The Waterfront set the kitchen on fire and they had to evacuate the show during the interval. People were left outside waiting for 45 minutes.

“The year after that a show was cancelled to due to a hurricane. Hopefully with this run, all the drama happens on stage.