A wee man, unknown to me but apparently in the know with the great and good, but someone well placed in the shadowy world of the theatrical millpond, said he was here to ‘speak to a man about a dog’. ‘Subtle like, but worthy those in the know they only.’ He said not a word to be cursed damn on any Bible, Quran, the many Hindu texts, Talmud, and always, always he enthused, ‘out of earshot from those familiar with the darker arts, and ‘Never!’ he rose his voice at this stage. ‘Never!’ He sees his mate, a cockapoo under his equally natty coat, sisel holding the antique of a coat from releasing a couple of ferrets from running mayhem around Ridgeway Street’s beautiful building…

I never did catch the final threat but didn’t sleep well that night.

I first watched Ruby, roughly this date last year. And the make-believe cockapoo and ferret expert is none too far from the truth. Libby Smyth has forgone the natty familiars that were her costume in 2019 to 2020, I think Doran and Co. wanted to remind us this elderly lady was not just a washed-up-piece of spat-out detritus. This move works wonder.

The director’ shoes are filled in this run by Colm G. Doran. Met him quite a few times; takes a lot to do with the MAC and Three’s Company theatre company: Again, a return to the mainstage is welcomed. So welcomed, my friends, it’s a sell out. Sorry kids, but tickets area as rare as an innocent politician in power.

Apart from Libby/Ruby being in finer attire, more befitting her station in life, 2019’s green chair is still centre stage. a phone, probably smarter than many of us watching; nick-nacks, here and there. And of course, that wee bottle of Whiskey. Never too far way – like a kid’s blanky or one tormented by panic attacks frequent callers, the bottle hasn’t moved an inch.

Retelling her life from a child in Belfast to the bright lights of grand old U S of A; only the delusional or super famous with more Oscars to their name would try and to better her on one-up-manship on the name dropping front.

The music is splendid throughout; all the ones you didn’t ‘know’, didn’t ‘think’ you knew and the ones steeped somewhere, back in the recesses of a child’s mind, will flow freely from their chambers. From Galway Bay, to Softly Softly, Danny Boy and Let me Go Lover.

Another change by Colm G. Doran is the addition of movement. 2019 saw little, if any of Smyth move from her chair. When passions arrive, which the do often, Smyth is out of her chair and the world is to be set right.

80 minutes of at times painful, at others, the voice of a raconteur with a thousand gripes to sort out. But best to last; she’s a survivor. Whiskey may be her crutch, but what a wonderful lady telling a tale five decades in the making and with a mind as sharp and cutting as diamond. 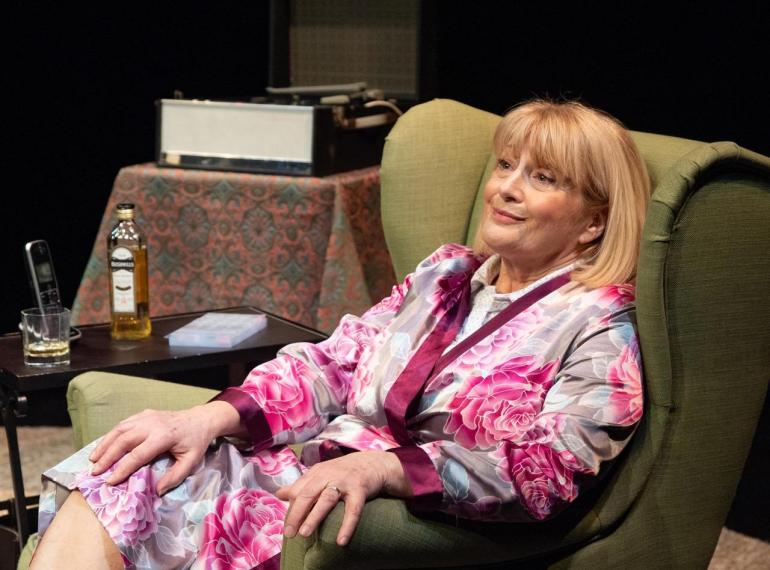 Tour dates are at the bottom of this article. If I were you I’d get on the blower now and try to get a ticket, NOW. I mean right NOW! Stop reading these words scribbled by a failed-flack-jacket-journo. Book tickets now!

Tour dates are as follows: